I am reading this very strange book that is not really in my genre, but the longer I read the more fascinated I am by it.

There is a kingdom and a princess and a dragon and a series of princes, most of which aren’t so fabulous. This princess is young and naive and keeps falling in love with suitors that are less than what they should be as princes, except for one. She despises the one prince who will most likely be her salvation at the end of the day.

At the moment her kingdom has become a barren wasteland of ash and rubble and she herself has been turned into a dragon. She has foolishly trusted a prince who says he’s trustworthy. She gives him her whole heart and he takes it, but never returns.

She is left choking on suffocating dragon fumes, listening to the dragon breathe out poisonous lies.

She musters enough courage to leave and, since she’s now a dragon, flies off to find her beloved. The one truth that the dragon has told her is that her prince was not trustworthy, that he took her heart and now she has none. He is betrothed to another. She wants to know the truth. She believes that he will come for her.

This morning I woke up feeling somewhat like that princess. My landscape is fairly charred and full of rubble. I have been choking on clouds of despair as I look around at the ruins we are currently living in.

Then I went to a quiet corner of the house before the children were up and opened the Word. 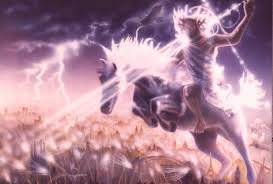 My prince was there.

He rode out of the pages of scripture and captured my heart with the truth that imprinted itself on my soul once more.

He has given me what I need to get through this difficult period, He himself will give me wings to fly.

He has rescued me from the dragon.

And I won’t be a dragon at the end of the day, I will be His bride.

Those who trust in Him need not be afraid.

So I will trust the One who has my heart.

Because that’s what love does.

Your words mean the world to me. Thanks for taking time... Cancel reply